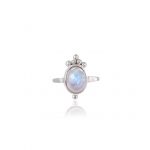 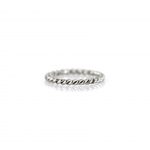 Gomti Chakra (also known as Gomti Shila or Cow’s Eye Chakra) is a rare, naturally formed shell stone obtained from the Gomti River (Gumpti River) where it meets with Dwaraka (Gujarat, India) at the sea and is closely associated with the Dwaraka Shilas. One side of the Gomati Shila is elevated and bulging like a shell and the other side is flat and displays the design of an outward expanding spiral. This spiral structure represents Fibonacci Number – the Golden Ratio – Phi Spiral – Spiraling Consciousness. The Sacred Spiral is an ancient symbol of speedy growth and evolution.

It is believed to bring luck and is used in spiritual and Tantric rituals. It is believed that those people who possess Gomti Chakra will be blessed with money, good health and prosperity.

There are no reviews yet.

Be the first to review “Gomti ring” Cancel reply

No products in the cart.